Growing Vegetable in Grow bags or other containers 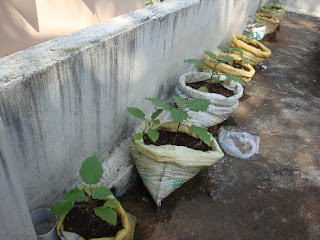 Nine sacks planted with egg plant, In few sacs I managed to plant 2 or 4 depending on the size of the container. 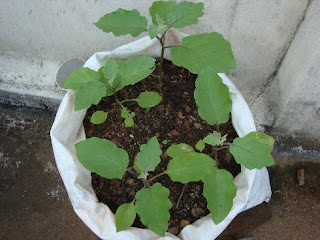 In this image you can see 4 plants in one container, not sure how productive this would be, lets wait and see. 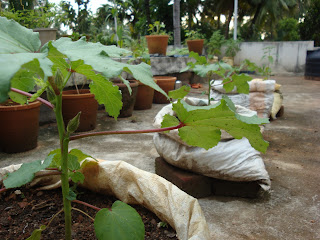 Second batch of okra with 6 Plants.
First batch of okra was removed, this time yield is much better than the previous batch, use of more of compost is one among the reasons. 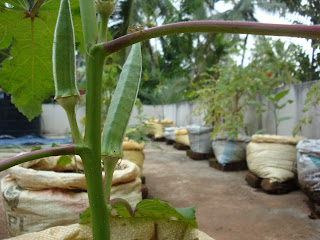 Soil mixture inside the container should not be hard, which can be avoided while using more of compost. 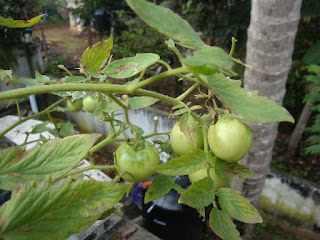 Among the previous batch apart from Okra plant, rest of the plants are still fetching vegetables. But yield is deteriorating. 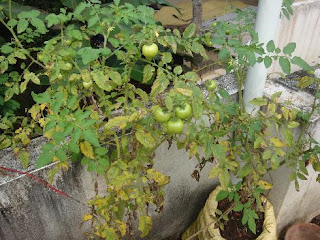 For instance tomato plant is still with 20 nos in one plant. Another verity of peas started flowering other plants that may fetch fruits within a week that includes, Green eggplant, purple egg plant, green chillies and bitter guard. 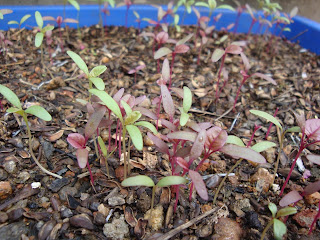 Seeds were initially sown on hydroponic filled tray.
Water should be sprinkled every day and should be protected from direct rain drops. 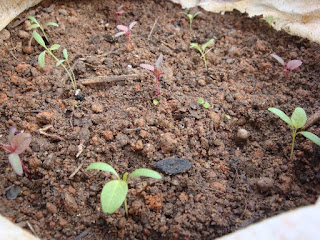 After seven days from sowing the seed, the seedlings can be transplanted to bigger container. Cheera can be harvested  in a month. Here in this image the container that I used is a plastic sack, and planted 10-12 seedlings. 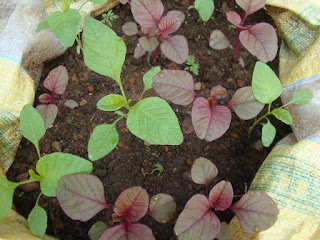 Vegetable garden on terrace or roof

Inspiration on growing vegetables on roof developed while discussing with my friend Mr D, he had lot of video collections and that influenc... 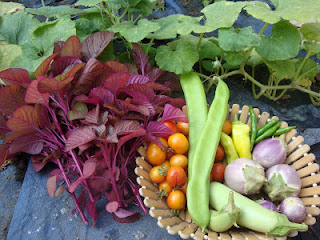 Organic farming is a form of agriculture that relies on crop rotation, green manure, compost, biological pest control
and mechanical cultivation to maintain soil productivity and control pests.
Since in urban cities limitation is insufficient land for farming, the concept of terrace farming, vertical and container farmings are upcoming trends in urban farming. Here in this blog I will be sharing every single effort and techniques in building my Organic Roof :)

Soil: Red soil in the Southern-most part of Kerala